‘Airmiles’ is still taken by most people to refer to be a good thing : vouchers for extra ‘free’ air travel, as a reward for having paid for previous flights. With growing awareness of global warming, however, some individuals have begun to restrict their personal air travel, to limit the damage they do.
The airline industry plays down its greenhouse impact, of course – but as far as it does recognise a need to limit, for example, CO2 emissions, it directs attention overwhelmingly to improvements in the fuel efficiency of planes, per mile flown, rather than reduce the number of miles flown. And indeed, if a ‘zero carbon airline’ could exist, then “the sky’s the limit” might ring truer!

As we’re nowhere near fuel efficient flight, however, perhaps we do have to ask ourselves : How many miles per year can we sustainably travel by air?

We can arrive at a figure, but this will be based on certain assumptions, as well as firmer information.
First, let’s for the sake of argument suppose that each mile travelled by air will continue to have the same greenhouse impact as now. Then, let’s remind ourselves that global greenhouse emissions must be reduced by 80% by the year 2050 after the Climate Change Act was passed last year. Let’s therefore assume that the contribution from airmiles must reduce by that amount too.

So, what is our current air mileage? According to IATA (2009), a global total of 2.218 trillion miles (3.578 trillion kilometres) were flown on scheduled flights in 2008. They only have figures for scheduled flights, but estimate that this accounts for 95% of commercial air traffic (for the purpose of this discussion, let’s ignore military and private mileage). So, 100% of these current flights would be about 2.335 trillion miles. 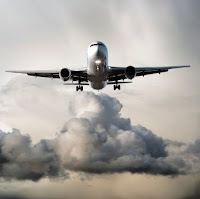 Most of the world’s 7 billion population have never flown, of course, and our current airmiles are flown by perhaps just the richest 10%. So, ‘rich world’ citizens seem to be averaging about 3340 miles each per year (with most intensive use being made by people such as frequent business fliers).

In keeping with the principle of ‘Contraction & Convergence’, however, whatever amount of fossil fuels etc that we use in future, we can only do so sustainably if it is shared out equally amongst all the world’s citizens (greenhouse pollution to date has, of course, come overwhelmingly from the ‘rich minority’).
So, an equal allocation of our airmiles would mean that on average each global citizen’s share would currently be 334 miles per year (something that most of the world might dream of).
Furthermore, if we give an extra allowance to members of migrant diaspora communities (in order that they can occasionally visit their family/heritage home overseas), and people living in isolated areas, this would reduce most citizens’ allowance further, to maybe 300 miles.

Finally, recalling that we must also make allowance for essential (hopefully greatly reduced) military & other state use, this would further reduce most citizens’ allowance to perhaps 280 miles in 2009. By 2050, this would reduce to just 56 miles per year per person (2% per year on average over these next 40 years).

In the meantime, what does this mean for us in the ‘rich minority’? Anybody currently exceeding 280 airmiles per year might be accused of ‘carbon theft’, ie. taking more than our fair share. In reality, most of the world’s citizen’s are not going to make use of their share in the next 40 years – this might be taken to mean we have some ‘elbow room’, to steadily and drastically reduce our consumption, without eliminating it overnight. The financial cost of air travel will clearly have to increase drastically, however, partly to compensate the majority who don’t fly, but require investment in other areas of their social development.

So, perhaps we could start by saying that :

Most individuals in the ‘rich minority’ should at least not exceed the current average of 3340 miles in the next year.

In keeping with the ’10:10’ campaign (run by Franny Armstrong, the director of Age of Stupid and aiming for people to cut their cO2 emissions by 10% in 2010), our personal allowance should be reduced to no more than 3000 miles by the end of next year.
The personal allowance should further reduce by at least 70 miles per year for the next 40 years, to bring us down to the global average allowance.

… Unless by some miracle (don’t hold your breath!) air travel becomes carbon-neutral, or following other less unlikely changes, in which case we recalculate again.

Comments are invited, eg on the assumptions I’ve made, or alternative figures we might use.

A workshop activity could be run on this, part of which could include participants working out their own actual airmile total for last 12 months, and what the 10:10 reduction would mean for their immediate future.