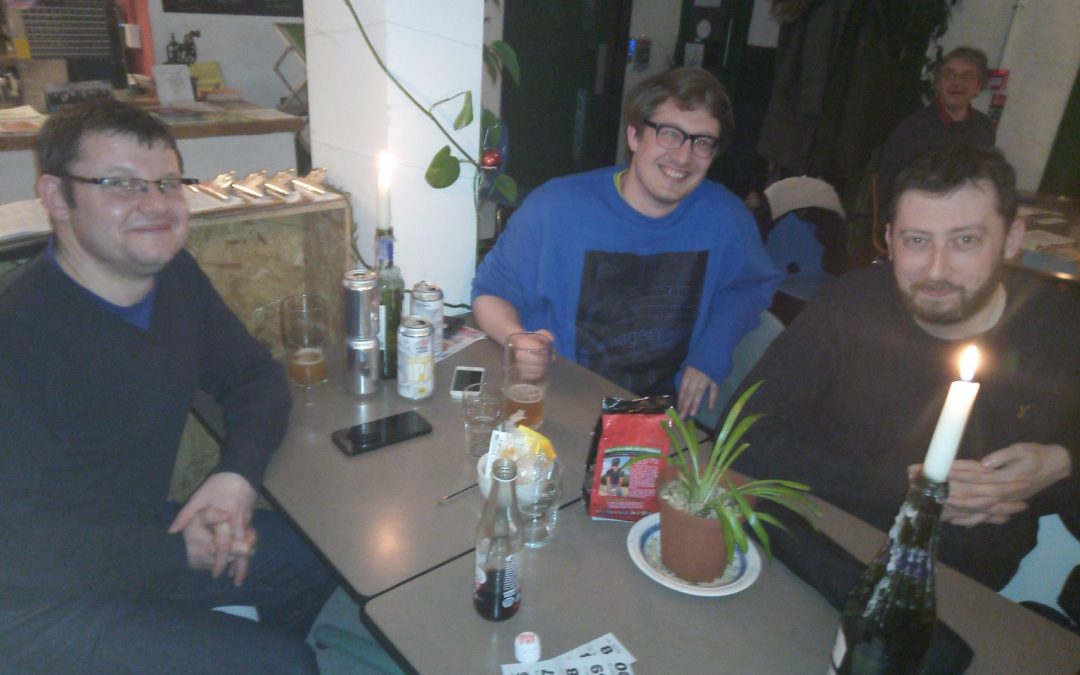 Some background info
About once a quarter, Birmingham Friends of The Earth host a quiz in the Warehouse Cafe. Volunteers from the campaigning group take it in turns to host the quiz. I hosted the quiz myself in 2015. There is a tendency for the host to pick rounds based on their hobbies and interests. As an example, my music round was based on great bass guitar lines. Schism by Tool is an underappreciated masterpiece.

A Yogi hosts
Long time Birmingham Friends of The Earth volunteer Aldo Mussi took on the role of host for this edition of the quiz. Some of his interests overlap with mine, including running and cycling, so I was hopeful that my team would have a decent chance of winning. I recruited a couple of the Manipulative Pandas team members, Matt and Dave as well as many time Birmingham Friends of The Earth quiz winner Ben. Recruiting Ben is a high risk strategy. On one occasion I was on his team and we did not win, so in an unprovoked act of vengeance he poured a pint of beer over me. That is how I tell the story anyway.

The quiz begins
Aldo started the quiz brilliantly in my opinion, by having a picture round of female athletes. Previous quizzes had been dominated by picture rounds of trees and or plants. Sports is much more in my wheel of comfort. We scored 9/10 on this round, which is much better than many non sport loving teams.

Other rounds, included rounds on Aldo’s passions. There was a round on geology, a round on running, cycling and yoga and a second picture round on EU countries. The star round was an innovative round that I had not seen before. We had a crisp tasting round, where we had to say what flavours each crisp contained. Unfortunately our enjoyment of eating crisps was not matched by our knowledge of crisp flavours. We scored poorly in this round, which ultimately cost us.

The defending Champs reign supreme
Last time out the team spearheaded by Jake Williams won out, to much surprise. His team’s had previously struggled to compete for victory, but he has found a winning formula as his team successfully defended their title. Jake showed his commitment to the cause by dancing on command for a bonus two points. In the post quiz evaluation, winner Adam noted that each team member had a niche of knowledge that led them to victory. Their broad base of trivia allowed them to take the trophy home once more. From my perspective, the part Manipulative Pandas, part Ben team came a respectable second.

We look forward to the next Quiz
I thoroughly enjoyed Aldo’s quiz. His crisp tasting round will go down in Birmingham Friends of The Earth quiz legend. Aldo seemed to make up the scoring system as he went along, which was amusing. The next edition will probably be in the summer and whoever hosts will provide a new variety of questions and rounds, all in order to support Birmingham friends of the earth, and to have an enjoyable social too.