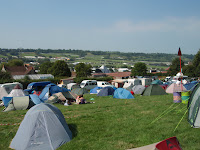 The Glastonbury festival is absolutely unique. It is the one festival where the music is almost incidental to whether or not you have a good time. There is music everywhere and most of it you just stumble upon. Blur was a major highlight, but apart from them, just wandering around was the best thing about it for me and all my plans to see this band or that went out of the window (or would have done if I’d had any windows. 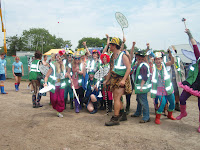 The four lock-ups run by Birmingham FoE volunteers did a great job of keeping people’s stuff safe and providing miles of free loo paper (although most people gave us very generous donations for it) to desperate punters. I haven’t found out how much we raised yet, but the indiocations are that it was a very good total and will again provide invaluable financial assistance for our group. A huge thank you to everyone who came along and especially to the organisers who made it possible. 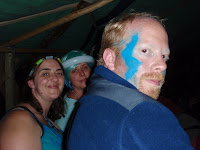 We also had some very fetching masks and displays about the food
chain campaign at the stalls and got some postcards signed. Personally, I would have liked to have been able to do some
campaigning away from the business end of the lock-ups. Greenpeace had a whole field for doing that with a mock airport and model Sipton village. I also had my face painted blue by Oxfam for their climate change campaign and saw green police everywhere, which was fun. Hopefully, next year we can get in on the act and talk to people about our campaigns a little more.
It was still very much worth going and gave everyone a great break, while being able to do something useful too.