Over the years a few different animals and plants have been termed the new canaries in the coal mine for climate change and the ecological problems facing the world. Amphibians are at terrible risk of being wiped out, which could lead to huge increases in the numbers of insects and other problems. Coral-bleaching shows how much the oceans are warming and there is also evidence of how acidic they are becoming, with the real possibility that they could lose their ability to store carbon. Now though, it is the turn of the bees to become the symbol of environmental problems with a new film vanishing bees looking at the reasons for colony collapse disorder and warning of the consequences if nothing is done to save them. 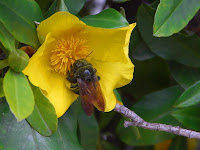 On Wednesday a few of us from Birmingham Friends of the Earth went along to see the film at The Electric cinema and all of us certainly did come out thinking we wanted to do something – maybe put a hive on the roof of the Warehouse? Well, no that’s probably not feasible, but definitely plant some bee-friendly stuff in the garden and maybe chuck a few seed bombs into the disused bulldozed sites of Digbeth.

While not as bleak as the Age of Stupid, the picture given in this film in the no-action-being-taken scenario, is also pretty worrying. The arguments for the importance of bees for all of us are pretty stark and cannot be ignored. The trouble is that neither this film nor any scientific study has provided conclusive proof of what is causing the bees to disappear. If you go expecting to get that, you’ll be disappointed.

As a film, the vanishing of the bees has been described as “earnest”, so I wasn’t expecting it to be much more than informative, but there certainly were some interesting characters in the film and a few shocking facts – for example, the USA is now flying in bees from Australia to pollinate certain crops!!! It was also nice that there was a woman called Bee and a man called Dr Pollan in there who obviously belonged in their field.

The culprits are gradually revealed in the course of the documentary through interviews with bee-keepers, scientists and farmers. As an environmentalist they are pretty much what you’d expect; the use of certain pesticides, the use of intensive farming methods that have created huge monocultures rather than the biodiversity of mixed organic farming systems, loss of habitat and probably some of it is due to the industrialisation of bee-keeping itself. Many of these are also drivers of climate change and other problems associated with the ecology of our planet, so although the fate of bees is not necessarily directly linked to climate change, if we deal with one we will be helping to deal with the other, too.

I hadn’t realised quite how much The Vanishing of the Bees would be about the USA, but that was primarily the focus, with only a minor mention of the UK. The fact is that we are the two countries mentioned who have not banned a certain Bayer pesticide with nicotinoids, which has been banned all over Europe where bee-keepers showed conclusive proof of what it was doing to bees (even Germany has banned it and Bayer is a German company!). I very much liked the French bee-keepers who took on the industrial giant and won, describing themselves as hippies who had been underestimated.

The American bee-keepers were interesting characters, but most of them work on such a massive industrial scale, taking their bees back and forth across the USA on lorries, that I kind of want that way of working to fail. There were a few small-scale bee-keepers and the ones who work locally with crops that flower at different times of the year seem to be doing much better.

Overall, it was certainly worth going to see, but the film was a bit over-long and could have been a bit bolder. For someone who didn’t know about the topic at all, it would be very revealing, but for those with a reasonable amount of knowledge already, it did sometimes come over as a little patronising.

What is clear after seeing The Vanishing of the Bees, is that we must do something to change the destructive farming practices and have a new green revolution. This will help with food security both in terms of contributing fewer of the greenhouse gases that are causing climate change and in helping to protect bees who are vital for so much of the food we eat. This all ties in very well with our Fix the Food Chain campaign, so look here to see how you can help with that in Birmingham this weekend.