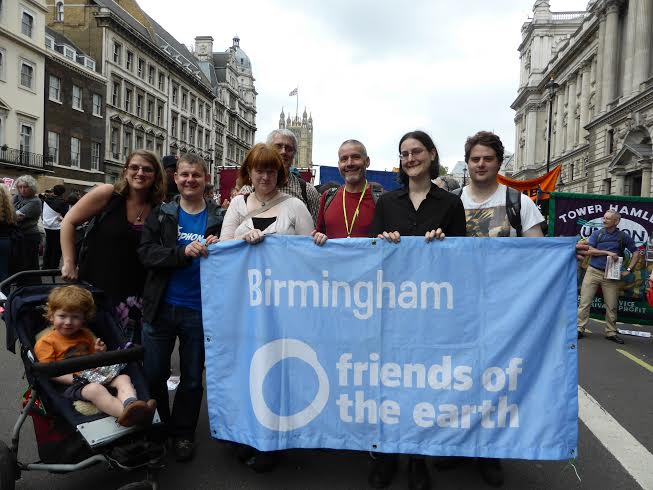 On Saturday members of Birmingham Friends of the Earth travelled to London to join a quarter of a million people demanding an end to the austerity agenda that is driving a wedge through this country and increasing inequality at breakneck speed.

The BFOE crowd spanned six decades of ages, we had a playlist of revolutionary music and a hip flask of grappa. Even if we hadn’t had a three-year-old in our numbers, excitement would have been running high. Happily police and protesters behaved themselves and the day was good humoured, with a soundtrack provided by samba bands and reggae sound systems.

Friends of the Earth were there because austerity has profound and direct impacts on the environment, but also because as a movement we are underpinned by social justice.

It felt incredibly powerful to be marching alongside trades unions, disability groups, families, doctors, civil society in all its many and varied forms. Our causes are the same; our struggle is the same struggle. We marched in solidarity with everybody that can’t march, with everybody suffering on the frontline of economic injustice, in the UK and across the world.

Despite the level of fury felt by the protesters being unmistakeable, it is also a powerfully uplifting experience to be joined in unity with so many others. As campaigners it can easily feel like we are impotent in the face of vast wealth and power, but marching on Whitehall on 20 June we didn’t feel alone. Many different groups and causes were represented, and undoubtedly we would disagree on many finer points.

What brought us together were the fundamental values of equality and fairness, and by a belief that by working together we can demand and achieve a better world.

Campaigns aren’t won by marching, but a collective display of unity gives us the strength to keep going in our communities, knowing we are part of a bigger movement that is growing all the time. 250,000 people does matter. As the cry went up along the march: Cutbacks? Fight back!