The planning committee of Birmingham City Council will meet tomorrow morning to decide on the installation of a photovoltaic array on the roof of St. Mary’s Church in Moseley. 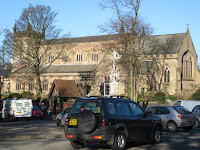 SusMo has been rallying support for this as it is a crucial part of the plan for spending the money they recently won in the Green streets challenge to bring energy savings and sustainability to the area.

A report to the committee by the planning officer has recommended refusal, but this withholds crucial information, and seems to entirely ignore Birmingham City Council’s own Sustainability Strategy and Action Plan, as well as the government’s Planning Policy Statement 1: Delivering Sustainable Development. Under the heading of ‘Policy Context’, the report fails to mention a letter of support from Birmingham City Council’s head of Climate Change and Sustainability, Sandy Taylor. Furthermore, under the heading of ‘Sustainability’, the report states the project as ‘Neutral’ – failing to note the array’s expected contribution of 8000kWh of electricity. SusMo has written to all members of the Planning Committee to alert them to these omissions.

With regards to the listed status of the building, it is significant that the National Trust has recognised the threat that climate change poses to our national heritage, and that there will be none left to conserve if climate change is not tackled. The National Trust first installed solar panels on the roof of one of its Grade I listed buildings in 2008, and recommended that owners of other Grade I listed buildings follow suit, where appropriate. Indeed, solar panels are particularly appropriate, given that their installation is a simple and easily reversible procedure which causes no damage to the roof that they are installed on.

For a current example, there is a photovoltaic array on St. James’ Church, Piccadilly.

It is also notable that the Moseley Society, which for decades has guarded the character of the Moseley Conservation Area, is in favour of the application. In total, 22 messages of support were received, and just two objections – one of which came from the Chantry Road residents’ association, which did not consult all residents before forwarding their objection. However, no objections were received from residents on Oxford Road, which is the vantage point from which the panels will be seen most frequently.

If the Planning Committee refuses planning permission at its meeting on Thursday, not only will Moseley lose all the benefits that the project would bring to the parish and the wider community, but also, the £30,000 contribution towards the cost of the project from the British Gas Green Street project will be lost, as it has a tight timescale.

The Planning Committee meets on 4 February at 11:00 in Committee Rooms 3 and 4, Council House. The St. Mary’s photovoltaic array is Item 15 on the agenda.

It would seem very strange indeed to reject such a project the day after Birmingham City Council announced it was signing up to 10:10.