On Saturday, the Birmingham Friends of the Earth Santa Parade took to the streets for the 8th time. This time we were joined by a polar bear for the first time ever and also took part in a Mexican Guitar Wave. Buy Nothing Day has never seen the like before! 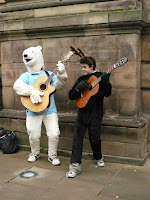 The usual messages about over-consumption were on display with our placards, as well as the more general Climate Change one in supporting The Wave. We were all filmed playing air guitar with our placards along with a few people who had real gu8itars and many others with pretend ones. After that, Andy and I were interviewed by a journalist from Birmingham Recycled before starting the Parade from St Phillips Square. 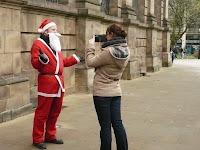 We stopped outside various shops to be photographed as we made our way down towards New Street. The public were happy to see us as always and several people were asked for photos and/or hugs by passers-by. We were happy to oblige, of course, as that is entirely in the spirit of the event and costs nothing. 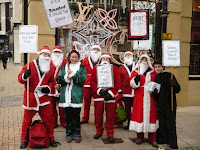 We had a few eventful encounters with people of rather extreme views about Christmas and a short and easily resolved encounter with the police and council officials. Mostly, though, it was another successful and fun Santa Parade with the message of buying more not being what makes you happy well understood by those who took the time to talk to us. 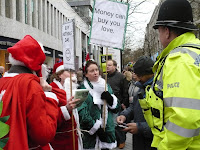 Please see the report on our discussion about consumerism from Birmingham Recycled for more on the issues surrounding Buy Nothing Day. They should also have a video up on there soon with the interviews. To end this short report on the day’s activities, though, here’s a picture of a load of Santas at a bus stop. 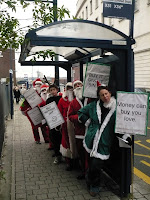