As an environmental outreach officer for Birmingham Friends of the Earth I recently attended a workshop/training day through Eco-Teams, which was an interesting event as where I made some good contacts. I met Phil Beardmore of Birmingham Sustainable Energy Partnership, John Boyle of the Midlands Co-op and of the staff who helped facilitate the event itself. 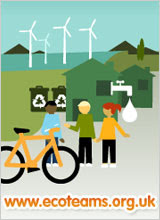 The Venue was the Birmingham & Midland Institute, which was very nice, but didn’t have any signs to the event in the building. To cut a long story short, there were two events on that day and I ended up in the wrong one to start with. After I realised this I eventually found the location of the event and I was welcomed, despite being somewhat late.

The event was slightly rushed, which was a major pitfall, in my opinion, as it created a chaotic environment. Although the miniature classes/workshops were very basic in terms of the main issues of climate change, more time would have been appreciated. However, the material used was informative and made me think about how I waste energy on a domestic level. There was a lot of group work involved in the activities and it was led by table facilitators, so we were never left to our own devices.

I think the way they organised it was interesting as there were about six or seven tables, each with a facilitator. They all had separate topics to cover and at the end of each lesson/workshop, we did a brief presentation on what was covered to all the groups, which was a very effective way to cover many topics related to climate change quickly. Although my reflections on the day may seem negative, the overall agenda of the event was admirable and people without much knowledge could learn and do something practical.

The main point of the event was to inspire people to lead their own Eco-teams. This could be done on an independent basis or as a group. Eco-teams have an array of support on their site, from activities to lesson plans and ideas to use in your projects. Each person has a five-month period to complete their project, but if they have someone else in their group who wants to, they can take over the role of leader and continue the project.

I would generally suggest that this is a great project for people who want to take it on and environmental organisations should work together to provide support for it.