Following on from In Town Without My Car Day

Last Tuesday some of the Birmingham Post’s Power 50 took up our challenge to show some leadership and give up their cars for the day on In Town Without My Car Day. Even senior figures at the council pledged their support for the idea and so we are hoping that next year there will be some officially sanctioned events, but, even more importantly, some drastic improvements in public transport provision in Birmingham and in safety measures for cyclists and pedestrians.

One of our volunteers went with councillor Salma Yaqoob as she did without her car for the day. 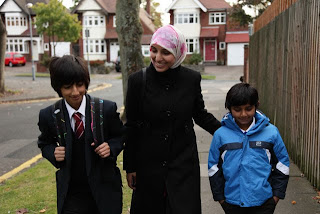 Pictured here walking children Mikael and Aslan to school, councillor Yaqoob said “Normally taking the children to school and travelling to work in the morning is a last minute rush. We lead such a packed life so we save time in the car. Today it felt good – not driving. I had to do this. We had extra time to chat. Walking is good exercise and it felt like the right thing to do.”

Her eldest son, Hamza (not pictured) goes to school on the bus every day, which councillor Yaqoob thinks is important for teaching him independence. “Over-protecting our children doesn’t help them so it is good for him to go on the bus.” 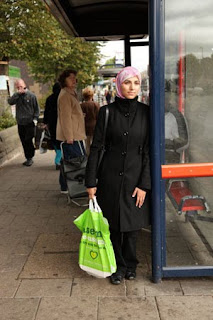 Salma Yaqoob herself confesses that she doesn’t use public transport very often because it takes longer than going by car and she can’t afford the time. She also conceded that it was time to take action to improve the situation “As a party, we need an integrated transport policy. The less people feel daunted at leaving cars behind the more they will use public transport because it is convenient and it saves time”.

She also pledged to improve her own record in future “I hope that this time next year I will have a it more of a record of using public transport, refocusing my good intentions. The test is whether I can keep it up. I think it will be a slow and steady change for me”. 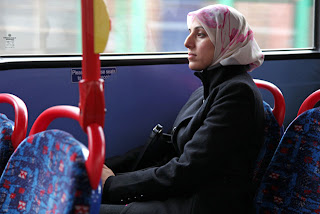 Another of those who took up the challenge on the day was Professor David Bailey, who is very clear that it’s the lack of decent public transport that keeps people in their cars and asked “Why not have road pricing like in London and put the money into public transport?”

From the business angle, Jerry Blackett from the Birmingham Chamber of Commerce also took part and was pictured with his folding bicycle on the fron page of the Birmingham Post. Of the experience, he said “The journey took 45 mins which is 20 mins longer than by car. However, being on the train for part of this, I could read my day’s meeting papers etc. for 30 mins, so gained time overall.”

He also said that he would support having a good look at organising something more substantial for the day next year, although encouraging cycling in general should be the highest priority, “As a cyclist, I also want to see more provision of road space. This is difficult for Birmingham. We don’t have the wide streets some other cities enjoy. But I’d like to see what we think we might achieve”.

Many of Friends of the Earth’s members and supporters are car-owners, so we would agree with Mr Blackett when he says “I think it important we don’t demonise the car driver”, but also that we need to “make alternatives to the car attractive so that drivers get more choice”.

Our campaigns are not about taking all cars off the roads every day, but encouraging people to use other forms of transport when possible and recognise that roads are not only for cars, but for cyclists and pedestrians too. Pedestrianisation has made a huge difference to Birmingham city centre, but we sincerely hope that the Big City Plan will also make a difference to the accessibility of wider areas of the city by cycle or foot.

We will continue to push the council to improve public transport and facilities for walking and cycling. Our twenty’s plenty e-petition can be signed here and there are also petitions for better bus services and re-opening rail stations.

Next year we would like Councillor Len Gregory to take In Town Without My Car Day seriously and organise some proper events for it, as other towns do. With such actions we can start looking at changing Birmingham’s reputation as an overly car-friendly city that is not suitable for cycling or walking around.