July 23rd brought news of two schemes that may indicate progress on the ground toward installing transport that results in less greenhouse gas emissions. The first is electrification of the Liverpool to Manchester railway (via Newton in le Willows); the second is an extension of the Midland Metro tram through the streets of Birmingham from Snow Hill to Moor Street. The railway scheme hopefully means that skills will be built-up for projects around Birmingham where electrification will also be required. 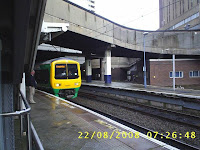 In both tram and train cases, the use of the vehicles requires generation of electricity, sometimes in distant power stations. The way in which this power is generated needs to be considered as does the longevity of the vehicles manufactured to ensure it is as low carbon as possible.

For Midland Metro, the existing vehicles look set for the scrapyard (although hopefully they can be sent somewhere else where it’s flat) as new trams (that can cope with slopes) will form part of the new service. Positive aspects of the plan are that the street running will make it more obvious that Birmingham has a tram, and the changes at Snow Hill will give an extra platform to the train service. An unresolved flaw to the plan remains, however, in the shape of proposed Corporation Street bus expulsion; whatever powers them, Birmingham still needs buses.