Whilst looking over the plans for the proposed HS2 station at Curzon Street, I thought there seemed to be benefits, but also a few quite glaring and serious issues with the current design and its location as it stands.

The station is proposed to be built in the Eastside area alongside the current Birmingham to London railway line and places the terminal building adjacent to Moor Street Station on Moor Street Queensway. Undoubtedly Eastside is the best location in the city centre for any new high speed station, given there is available land, access to the proposed high speed route and it is an area in need of further investment. The general location may be convenient for these purposes, but unfortunately the proposed positioning could have bad consequences for the area in terms of urban planning and investment potential. Looking at the plans, the station cuts a swathe through the area, which looks to cut off several streets linking the Northern Eastside area to the Southern Digbeth area, and thus creating a significant barrier between these areas. Many will remember the much loathed Masshouse Circus that once corralled the city core and restricted development and people’s movements across into the Digbeth area, and how this was removed in favour of an open boulevard which was to allow the expansion of the city into the area beyond. It strikes me that the new station design is likely to resurrect this physical barrier, curtailing people’s movements and cutting off potential economic opportunities for both existing and future business in Digbeth. What streets remain will cross the station underneath, which when added to the existing railway bridges will mean for a dark and foreboding environment to greet anyone wishing to venture beyond. So in this design, are we simply recreating Masshouse Circus, albeit in railway form?

In addition, the proposed station’s position also swallows up a great deal of development land, much of which already has development proposals and planning approvals. Most notable of these is BCU’s Media Campus, which was due to be approved for detailed planning permission very soon and BCU are already very committed to this project. The station would also slice through Park Street gardens (which is also a graveyard) cutting the far end of the proposed Eastside City Park off from the Bullring area and causing a further barrier.

The main design mantra behind city centre transport hubs is that high density development should cluster around them, thus generating a critical mass of use around the hub to support it, and affording easy access and maximum benefit to these surrounding uses. Currently as the station would take up so much of the development land in the area, there would be little left for the development of these high density building clusters. Plus, as the station is slated to take up so much room, we’ll be left with the barren wasteland of Eastside for the next 10 years or more before the new HS2 line becomes operational.

So is there another option? Where in Eastside could we put a 400m long high speed station without carving up the urban fabric, without displacing current developments, without losing a mass of development land, and without leaving the area undeveloped for 10 years or more? Well the proposed Eastside City Park is around 500m long, is linear in form, and follows the right geometry for the incoming railway. No, I’m not suggesting dropping a station right on top of where the park would go, I’m thinking of placing it underneath. Much like Gare Montparnaise in Paris, which has Jardin Atlantique above it, the station would sit in a sunken box below ground level with the new park above, perhaps with sculptural lanterns and elements of glass floor to let daylight down onto the platforms below (we don’t want another dark New Street Station). Access by trains to the main line could be via a short tunnel under the canal, ring road and container terminal. The concourse could pop out on Moor Street Queensway to integrate with the City Park Gate development. It would be a short walk to Moor Street Station, and if the Metro were routed via Priory Queensway, Moor Street Queensway and under the Bullring tunnel, all four of Birmingham’s city centre stations would be linked together for easy transfers. A secondary entrance could even pop out into the old Curzon Street station building to allow easy access to the wider Digbeth area too. 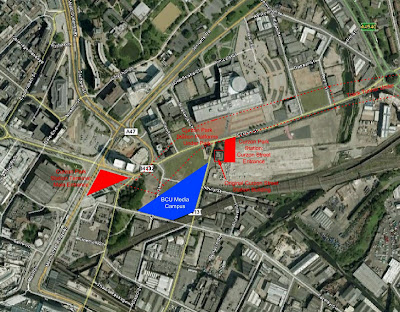 Above: Location of Curzon Park Station. 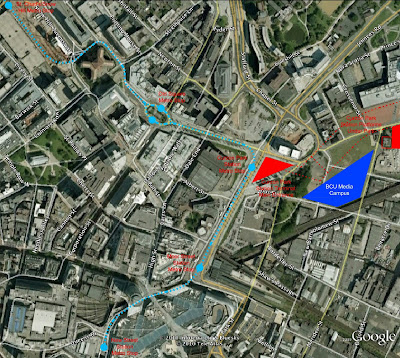 Above: Map showing re-routing of metro.

So would this new Curzon Park Station be preferable to that proposed by the government? Well, it would allow development to continue around Eastside, not cut through a graveyard, not form a new barrier to access and development, and still ensure a city centre terminus for HS2, and one merged with a beautiful park. Yes, it would no doubt delay the City Park a little, but the basic ‘box’ and park above could be constructed early on and then fitted out later. It may also cost more money, but then again what’s an extra few million when you’re spending £30bn on a rail route? On the opening of the station passengers would be greeted by the sight of a beautiful park flanked by successful and established development all around, ready to be connected to London and Europe.

So I’m putting out the idea for comment. Any thoughts on a Curzon Park Station?