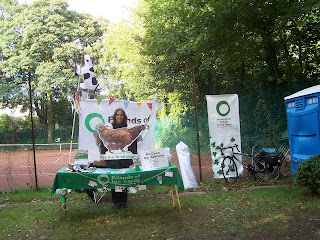 Giant chickens arrived at Moseley folk festival after it being overwhelming landslide victory after asking on Facebook and twitter that Mary Horesh, Birmingham Friends of the Earth campaigner should wear it at the festival and was even caught on camera. Also, we had bunting and a fabric cow blowing in the wind to give the stall a real country fair feel.

Birmingham Friends of the Earth were lucky enough to have a stall at Moseley Folk Festival and had an enjoyable time, listening to the music but also getting the public to get involved in our campaigns. One festival goer came congratulated the team and thanked us, encouraging us to keep up the good work.

Over the weekend we collected around 250 postcards for the fix the food chain campaign and around 200 for the reopening Moseley and Kings Heath station.