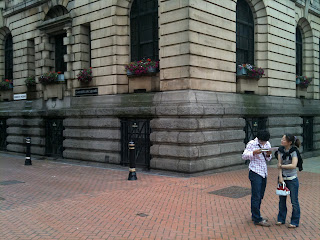 Wednesday 7 July I went to park my bike at the usual spot I use next to Birmingham Central Library only to find the racks had suddenly disappeared! Replaced by a pair of bollards. Maybe someone at the council wants to really encourage all possible alternative modes of transport and figures these can be used to tether horses. I got chatting with a passerby who had also noticed this and he was as puzzled as I was.
I called Graham Lennard at Birmingham City Council ‘s Travelwise team who is as much in the dark as I am. He’s endeavouring to find out why the racks have been removed and more to the point where and when they will be reinstated.
I will update this blog as soon as I have some news.