Positive Money is coming to the City of the Future

I am keen for people to grasp what Positive Money is saying; i.e. that banks create almost all of our nation’s money supply and that it is a big problem. 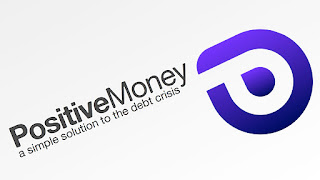 Most people seem to think that the government creates our money and that we all deal in it for the things we need for our daily lives. Unfortunately, this is not so.

Almost all the money in circulation apart from the tiny amount that is bank notes and coins is money created by commercial banks when they issue loans. This makes banks the owners of almost all our money and they get to decide where it goes in the economy. They put it into raising the price of houses which hurts people.

Instead, new money should be created in measured amounts, that won’t cause inflation, by the Bank of England, as an asset of the nation. Then the Bank of England (I personally think) should give it to the elected government who should spend it on things that help us run a lively export economy and earn our living in the world by doing stuff that actually makes the world better for people; i.e. infrastructure, university and technical education, science, research, product development and power generation research etc.

It is a crucial change that could actually take place to take the power to create money from the banks and give it to public authority i.e. the Bank of England. Then we’d stand a chance of getting on our feet as a nation and having a good influence on the world. There would be good satisfying jobs and a point to getting a good education so as to be useful players in such a great and honourable endeavour. 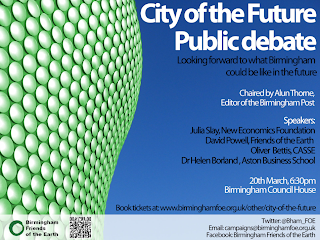 I’m really glad that Birmingham Friends of the Earth are putting on the “City of the Future” event where ideas like this can be discussed and there will be plenty more on this at our stall on 20th March at the Council House in Birmingham. See you there.