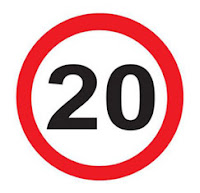 The transport action group at Birmingham Friends of the Earth are currently putting their efforts into trying to get a default 20mph speed limit introduced on unclassified roads (not A or B roads) throughout Birmingham. This would be a very cost effective way of changing the lives of a huge number of people. No expensive calming measures or cameras are called for, just changing the signs from 30 to 20. We are working together with the following organisations so far:

We are also looking to build a coalition with many more, so if you would like to get involved, let us know. There is more information on the Birmingham FoE website or you can write to
Birmingham@20splentyforus.org.uk .

Getting safer roads would mean more people feeling confident to cycle and use local amenities within walking distance. It would also cut carbon emissions as drivers would not be accelerating so much between the frequent stops that are made in urban journeys. Several towns across the UK have already introduced these limits with very impressive results, but if we could get Birmingham, the UK’s second city to do it, that would be a great achievement.
There is opposition to it from motoring organisations, of course, but they do not have any strong arguments that I have seen. A debate has been taking place in the letters pages of the Birmingham Post, which you can read below by following the links:

We still continue to campaign on better public transport, too, but this seems a vitally important first step to bringing about the (must use buzzword) modal shift in transport that’s required to make Birmingham greener.