Stones and Bones Exhibition and BFOE 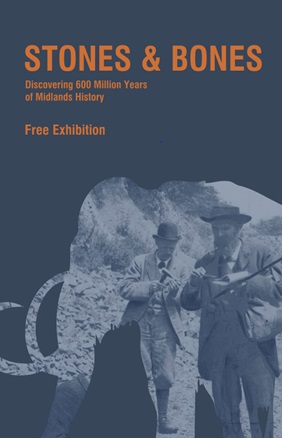 When we made the decision to solve some storage issues by donating a load of our old campaigning materials, newsletters and photos to Birmingham Library archives, I don’t think many people anticipated that these items would re-emerge alongside ancient fossils and rocks as part of an exhibition of 600 million years of geology.

I was surprised and delighted to be able to represent BFoE at the launch event of Stones & Bones, a fascinating exhibition at the Library of Birmingham, produced in collaboration with the Lapworth Museum at the University of Birmingham and showcasing local Midlands history.

A geology novice myself, it was quite a revelation to me how interesting all this really, really old stuff could be, and how all these changes from gazillions of years ago have shaped and formed the Midlands of today, and how we all live within it. The Midlands has been like the Mississippi delta, the Bahamas and the Sahara desert, and has been roamed by mammoths, woolly rhinos, hippos and lions.

The exhibition contains a strong focus on amateur discoveries, and I was quite taken with the idea that we could all become historical sleuths and piece together mysteries of the past. There is still so much that we can learn from the environment around us, and anybody can do it. I was outraged to learn that one significant discovery was made by a local schoolgirl in the 1950s, but nobody believed her and all the credit went to a schoolboy a year later!

The BFoE materials share a wall with some woolly mammoths and are the most modern thing in the exhibition, coming at the end of the timeline and essentially representing the human race.

The curators explained that they felt it was really important to demonstrate that geology isn’t something that’s over and done with; the Earth continues to change at a more rapid pace than ever before and these changes will have profound and irreversible effects on us all. It is great to see this message put forward and for the impacts of climate change to be included in this context.

Stones & Bones is part of the Origins Season at the Library of Birmingham and runs in the Gallery until 17 May 2015. Free entry.