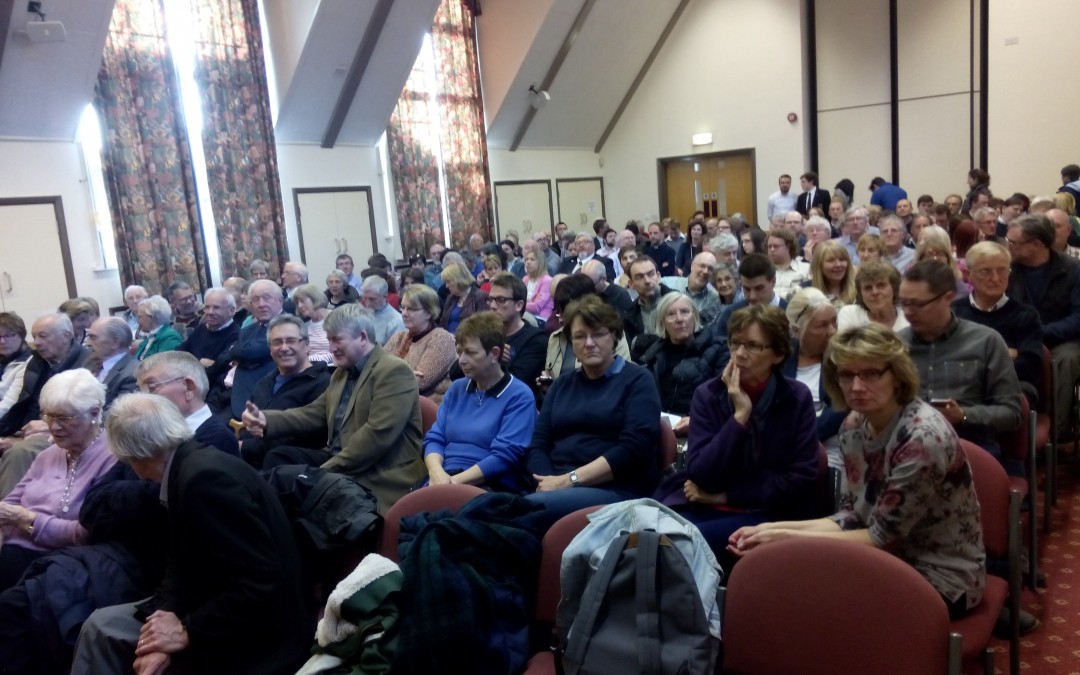 On Tuesday we were priviliged and delighted to put on the Sutton Coldfield Debates – the parlimentary hustings for Sutton Coldfield. We’d organised this is in a little over three weeks which brought its own challenges but was also quite exciting.

We arrived at the venue at 6.30pm and rapidly got everything ready before members of the public and candidates started to arrive. We were delighted that all 6 candidates were able to make it and take part in what was an interesting and enjoyable evening.

With the room packed to capacity and standing room only we got under way at a little after 7.20pm. We kicked off with the candidates giving a 2 minute opening speech. All the candidates talked a bit about themselves and what they would do for Sutton.

Liberal Democrat Richard Brighton Knight talked about a Town Council for Sutton. Marcus John Brown for UKIP spoke of his connections to the area. Andrew Mitchell for the Conservatives talked about how he would work to continue reducing the deficit.

Rob Pocock talked about how the opposition parties combined would win the election in Sutton and how Labour was a community party. David Ratcliff for the Greens spoke about needing to tackle climate change and the dangers of TTIP. Mark Sleigh for Ubuntu talked about the dangers of money and making banks owned by people.

We had a range of questions including ones on the local hospital, the town council, housing, electoral reform, refugees, income inequality, faith, and second jobs for MPs. To avoid making this blog too long I’ll concentrate on candidates’ notable responses to questions on TTIP and climate change.

For more info about what happened on Tuesday please check out the Sutton Coldfield Local Storify of the evening.

On TTIP Rob Pocock said we needed to stop any secret deals involving services such as the NHS. Marcus John Brown used it as an example of the problems of negotiating within an EU bloc, and said they would scrap it.

David Ratcliff said the Greens were outright opposed. Whilst Richard for the Liberal Democrats said we needed to trade but needed to see what was in the deal. Andrew Mitchell gave the most supportive response to the deal, saying trade was good for Britain but would make sure deal wasn’t bad for constituents.

Next we discussed how to tackle climate change nationally and where the candidates stood on ending subsidies for fossil fuels. Marcus John Brown for UKIP said we needed a balanced energy mix and while he wasn’t anti wind turbine they weren’t economical at the moment.

Rob Pocock talked about the need for a target to decarbonise the electricity supply by 2030. Richard Brighton-Knight talked about greater need for research and development. Whilst David Ratcliff talked of massive increase in renewables and greater insulation.

On negotiating internationally to keep temperature rises below 2 degrees. Andrew Mitchell said that under this government we had taken a lead and applauded the Liberal Democrats on this. Richard Brigton-Knight talked about the frustrations of trying to get a deal at international level. David Ratcliff said how we needed to get an equitable deal.

At a little after 9.05 candidates gave their 1 minute summing up, bringing to an end what was a very interesting and informative evening.

A big thank you to our partners in organising the event Equality West Midlands, Birmingham Jubilee Debt Campaign, and Eco-Sutton. Hopefully the environment and social justice will feature as highly in the national political discussion in the next Parliament as they did in Sutton on Tuesday evening!