Today, aspart of my year volunteering with Friends of the Earth, I had theopportunity of attending a meeting with MP Shabana Mahmood. Membersof Birmingham Friends of the Earth, representatives of New WorldSolar and Family Housing Association, and local residents met atMemorial Hall on Summerfield Crescent to inform Shabana about Friendsof the Earth’s Final Demand campaign and encourage her to supportus.

The campaigncalls on the Government to help fix our broken energy system. We areurging David Cameron to launch a public inquiry into the power andinfluence of the big six energy companies that provide us with 99% ofour household energy. We also want the Government to stop axingsupport for smaller, clean energy companies and community energyprojects.
It was greatto be able to experience the eco-village of Summerfield first handand see the innovative energy saving processes that have beeninstalled in the parish office. Examples of these were the lightwells that let daylight in through the roof and work as well aselectric lights (and look even nicer). Around the walls were displaysof the types of insulation used in the walls, including sheep wool.The effects of this were clear immediately on entering the invitinglywarm building. 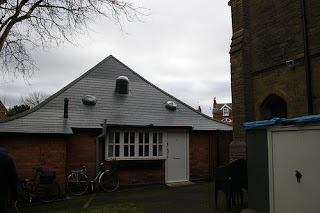 The meetingopened with a brief history of the Summerfield area from localresident Chris Vaughan, who explained that the idea for the parisheco office developed as part of the regeneration of Summerfield, andwas unanimously pushed forward by those involved in the project.Chris believes that the renovation of Summerfield is a main factor inmaking the area a desirable place to live.
Kara Mosesand Joe Peacock (Birmingham Friends of the Earth) introduced theFinal Demand campaign. Kara talked about the power of the big six,the public’s outrage at the rocketing prices despite a fall in gasprices and the enormous profits of the energy companies despite afall in sales. Joe spoke about the cuts in Feed in Tariffs and theunstable future of the solar industry that has come about as a resultof the Government’s decisions.
Overall,Shabana seemed positive and enthusiastic about a greener future forthe West Midlands. She understood the need to start a greenrevolution, and was aware that the West Midlands is the most fuelpoor region in the UK. She expressed particular interest in New WorldSolar, asking director Mark Clemson for a history and briefing of thecompany.
Shabanaagreed to take away the joint statement for further discussion, andthose who attended the meeting had a photo taken outside the parishoffice. 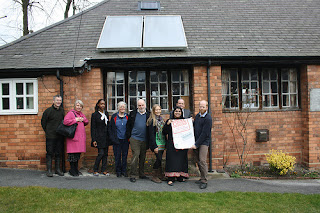