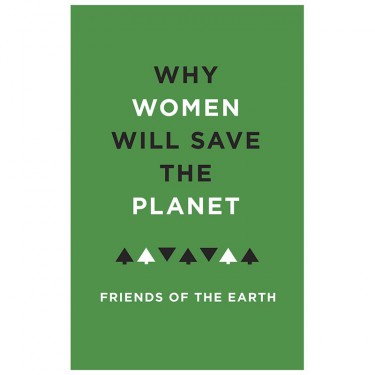 Women’s empowerment is critical to environmental sustainability, right? This is the question posed by Friends of the Earth as part of the Big Ideas research project, now emphatically answered YES by the book Why Women Will Save the Planet. It’s a collection of articles and interviews from some of the leading women in the environmental and feminist movements, ranging from those on the frontline of climate destruction in the Global South to those attempting to make corporate boards a little more gender balanced. It’s bringing together these different perspectives that I think is the most powerful function of this book. Together, they create a compelling case for gender equality and environmentalism being inextricably linked.

At times, it does read more like the set text from a gender & environment undergraduate course than the rallying call described on the blurb and hinted at by the provocative title. It’s not fiery women’s lib rhetoric – it’s in-depth analysis of particular topics, sometimes dry and hard-going, but ultimately much harder to dispute. I wasn’t impressed by every contribution; I can’t see the chapters on fashion and business leadership inspiring the next wave of feminist revolution, for example. As for Fiona Reynolds’s piece Sustainability is About People, she appears to have accidentally filed the introduction for her own autobiography instead of anything remotely related to women’s empowerment.

Before the book was published, my biggest fear was that it would be filled with a load of hippie essentialist nonsense about Mother Earth, which does nothing to further the cause of either gender equality or saving the planet. I was relieved that the vast majority of work was talking about the social situation of women and how that relates to climate change. The economic and political structures that oppress women are precisely the same structures that are enabling and exacerbating climate change, through exploitation, greed and inequality.

And why is climate change the greatest threat of our time? Because it exacerbates every form of oppression that currently exists in the world. This book is a rallying call to environmental groups, who need to not just to campaign for gender equality but to ensure that their own organisations actually embody these anti-oppressive values. We need to be organising in a way that transforms the structural inequalities of history into a movement of environmental feminists that is going to save the planet.