How we Revealed Birmingham’s Most Polluted Roads

Over the past few months, Birmingham Friends of the Earth have been researching into pollution levels across the city.

The research has proven to be particularly relevant following recent national news stories naming Birmingham as one of the cities projected not to meet EU targets until 2030, 20 years behind schedule. This coincided with the announcement that Birmingham City Council is one of several local authorities considering the introduction of Low Emission Zones in a bid to tackle the city’s poor air quality by addressing the main contributor – emissions from road vehicles.

It is no secret that traffic is the main cause of air pollution in the urban environment. Pollutants released from cars include,amongst others, Nitrogen Dioxide, Particulate Matter, Carbon Monoxide and Benzene. Many of these chemicals are detrimental to health and as a result the concentrations allowed in the air are closely regulated.

The research by Birmingham Friends of the Earth involved a study of nitrogen dioxide diffusion tube data provided by Birmingham City Council. Diffusion tubes,(small plastic tubes containing a Nitrogen Dioxide absorbing chemical) are widely used across the UK to measure air pollution. Once sited, commonly high up on lampposts so out of reach of passers-by, they absorb Nitrogen Dioxide from the air for a given time period then sent for laboratory analysis. You may be able to see them across the city if you keep your eyes open!

Birmingham City Council routinely monitors several locations across the city via diffusion tubes, which are replaced monthly. The results obtained over a year are averaged and can be compared to the legal limits for nitrogen dioxide concentrations in air. The information is then made publicly available in the council’s annual reports and on the council-run website: West Midlands Air (www.wmair.org). For information on how you can interpret this data, feel free to contact the Birmingham Friends of the Earth office.

Council monitoring data reveals several locations across the city that are over EU limits for the gas: in 2013, 7 of the 10 roadside locations sampled showed yearly average concentrations above the legal limit of 40µg/m3. This is similar to 2012 where 5 of the 7 roadside locations for which data is available reported an exceedance.

Our research made local headlines with the Top 5 Most Polluted Locations in Birmingham being reported by the Birmingham Post (21 August 2014). There has been little change in the top 5 between 2012 and 2013, with areas of Broad Street, King Heath High Street and outside Birmingham Children’s Hospital making the list for both years. The location taking the top spot in both 2012 and 2013 reported nitrogen dioxide levels of 52µg/m3, a whole 30% above the legal limit.

Not all roads are being monitored for poor air quality, but data collected by Birmingham Friends of the Earth shows that there is still much work to be done in reducing pollution. Previous methods of tackling poor air quality haven’t proved effective with only marginal improvements observed. Long-term data from 2007 to 2013 shows that most of the hot spot areas are still affected by dangerous levels of air pollution and the rate of decline year on year is slow. Measures such as Low Emission Zones are urgently needed to tackle this enduring problem. However, in order to tackle this dire situation, as well as targeting the most polluting vehicles, there also needs to be significant investment in sustainable transport and removing polluting vehicles from roads.

Additionally, we have been able to provide a calculation of future levels of nitrogen dioxide pollution across the city. Using the Department for Food and Rural Affair’s (Defra) detailed air quality model predictions – based upon the number of cars, vans and lorries using the roads in previous years – as well as the most up to date future forecasting information provided by Defra, we have been able to determine the year in which nitrogen dioxide concentrations are expected to reach safe levels. These future predictions were then mapped to create an overview of predicted pollution levels on roads across the city centre and beyond.

Our research has revealed a number of streets which will not meet nitrogen dioxide targets until 2030, predicting residents of Birmingham will be subjected to dangerous pollution levels for up to 20 more years if urgent action is not taken.

The worst areas – highlighted in red on the map – include sections of the ring road, Tyburn road, A34 and A452 and are predicted to continue to experience dangerous levels of air pollution until 2030. There are also a number of roads reporting concentrations of nitrogen dioxide which are not predicted to decrease to safe levels until 2023, including Hagley Road and Coventry Road. Additionally, Bristol Road, Pershore Road, areas of the Stratford Road, Broad Street and the A41 may not reach the EU legal limit for five years.

These predictions are deeply concerning and show that Birmingham’s most polluted roads are not just motorways and dual carriageways but also streets on which people live and work. With data suggesting that this will remain the case for decades, poor air quality and its health impacts will continue to affect residents of our city unless drastic action is taken. This is why we have been calling on Birmingham City Council to invest and be part of the solution. With 25% of car journeys under two miles, there is massive potential for more journeys to be made on foot or by bike, taking cars off our roads and cleaning up the air. This is why Birmingham Friends of the Earth has been asking the Council to invest £10 per person per year on cycling and walking over the next ten years, to make it easier for people to choose a more sustainable form of transport. You can get involved in our campaign Let’s Get Moving by signing our online petition at bit.ly/lgmpetition until around mid-October. After this, find out more information about how the Let’s Get Moving campaign has progressed by visiting www.get-moving.org.uk or the Birmingham Friends of the Earth pages (www.birminghamfoe.org.uk). Together we can really tackle to problem of poor air quality by getting moving on active travel! 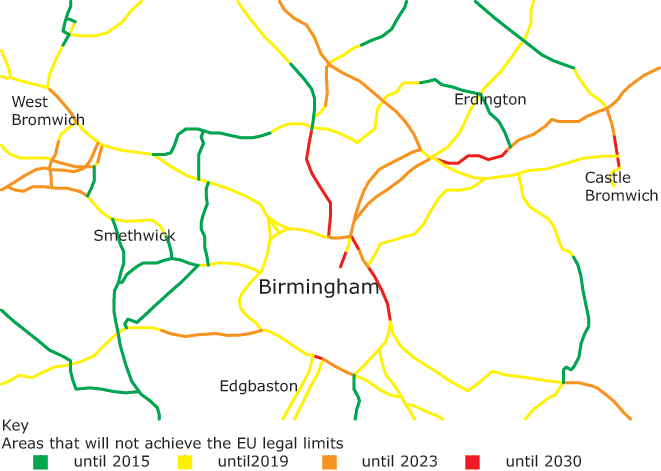