Join us for our International Climate Action Day on 14 October 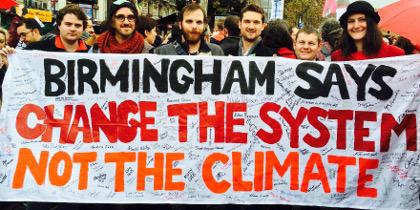 On 14 October 2017 activists from all over the world will be joining in on a day of action on climate change. Here at Birmingham Friends of the Earth we have decided to focus on our Clean Air campaign and how this links to climate change.

We will be meeting by St Philip’s Cathedral, Cathedral Square (near Colmore Row, Birmingham) and asking people to sign a mural and write their messages about why air pollution matters to them. We will also be asking people to sign a petition and those who want to can take part in a photo stunt. Local councillors will be invited to come and sign the mural, so this could also be a chance to talk to them.