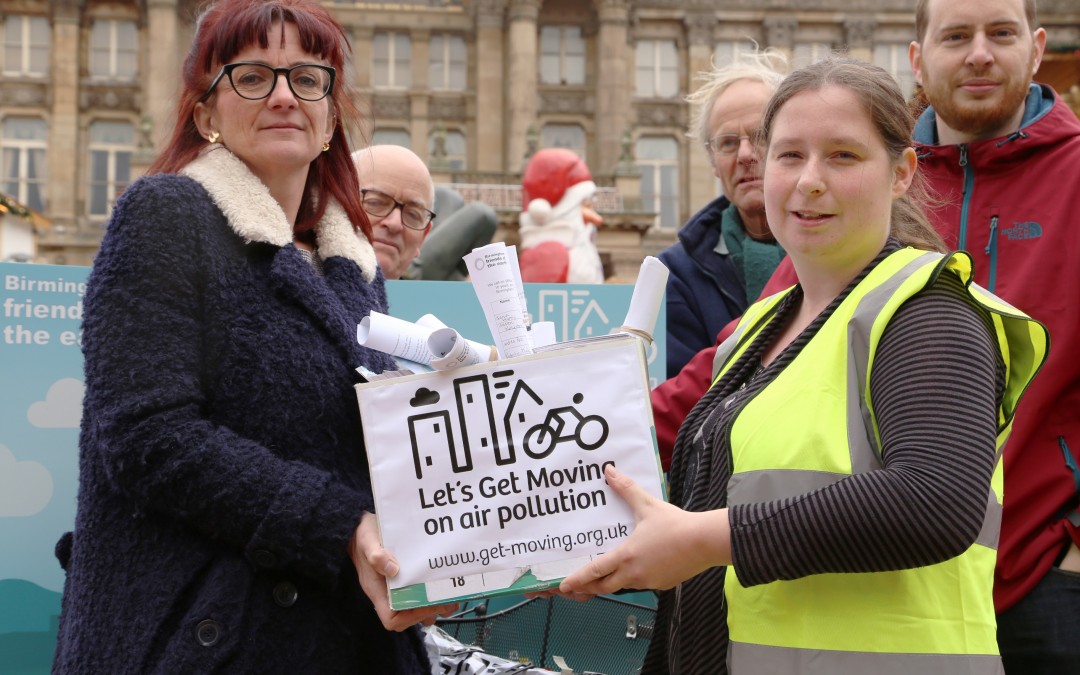 While the Birmingham Mobility Action Plan contained an aspiration for the Council to continue to invest £10 per person per year on cycling and walking, it needs to take concrete steps to ensure this happens for at least the next 10 years, in order to urgently tackle Birmingham’s illegal and dangerous levels of air pollution.

Poor air quality contributes to 520 premature deaths every year in Birmingham alone. The UK Government is currently being taken to court by the European Commission for failing to do enough to protect citizens from poor air quality in 16 cities which are over EU limits for Nitrogen Dioxide, including Birmingham. Birmingham is also one of three UK cities that will not meet these limits until 2030 under current plans.

As well as over 2,000 members of the public signing a petition, the campaign has gained support of community and faith organisations across the city, including several Neighbourhood Forums, Birmingham Cathedral, Birmingham Central Mosque and Birmingham LGBT Centre.

“The Birmingham Mobility Action Plan is a fantastic starting point, however what will really tackle Birmingham’s poor air quality is sustained high investment in alternative sustainable transport, particularly walking and cycling. With 25% of car journeys under 2 miles, there is a massive scope for people to walk and cycle shorter distances.”

“The recent investment from the Cycle City Ambition Grant was very welcome, however it is nowhere near enough to redress Birmingham’s historical underinvestment in cycling, and seriously tackle Birmingham’s dangerous air quality with the urgency we need.

“We are pleased to see the BMAP contains the aspiration to sustain cycle funding at £10 per person per year. We now need to see Birmingham City Council take concrete steps to ensure this happens, and to make a commitment to this level of investment for at least 10 years.”

“As an organisation based on one of Birmingham’s busiest roads we are acutely of the problem of air pollution. Continuing to invest in making it easier for people to walk and cycle is a really important part of the solution, which is why we have been delighted to support the Let’s Get Moving campaign!”

“As a Christian I want clean air for all of us, and I believe it is part of my Christian calling to campaign for it. It is about quality of life and welfare for all.”

“It is vitally important that Birmingham’s Cycle Revolution continues to receive funding at current levels to create a transport network where cycling is an attractive and comfortable option. We need to redress the chronic under-investment of previous years and help re-join our communities together to create a welcoming environment for walking and cycling, rather than continuing to build one that drives people into cars.”

“As an group that has been campaigning for over 2 years to reduce speeds on Birmingham roads, the Lets Get Moving campaign goes hand-in-hand with our objectives. Too often we think about the motorist, but it’s time that we think of the pedestrian and the cyclist. We are active in this area and will shortly be starting up our “walking group”

“The council is fully aware of the risks that are posed by poor air quality from road emissions, as raised by Friends of the Earth in its campaign.

“Birmingham has an Air Quality Action Plan in place which seeks to achieve a reduction in emissions. This is supported by the emerging Birmingham Development Plan and the Birmingham Mobility Action Plan which will set out a long term vision for sustainable transport in the city.

“The objectives of these will be delivered through closer working between departments and joint working with external partners including the regional transport authority and the surrounding boroughs.

“Furthermore, there are various funding streams commencing which offer vital monies to actually provide for cleaner vehicles or develop new technologies through local trials. Birmingham is looking to explore these avenues wherever possible and we look forward to making some positive announcements in the near future.”

While this hand-in marks the end of the group’s current work on Let’s Get Moving. We will be working to ensure the Council turns its aspirations to commitments!