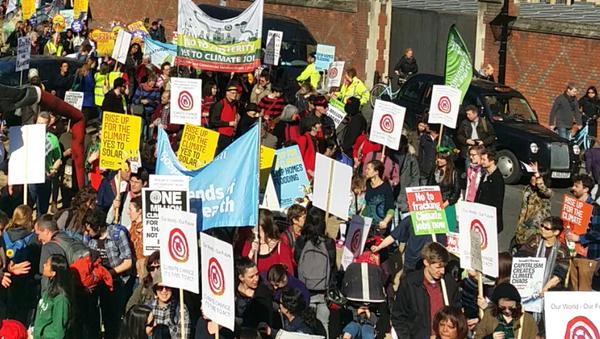 Happy Autumn! We’ve had a busy summer here at Birmingham Friends of the Earth, with lots of stalls and activities. With an action-packed next couple of months, there’ll be no lull during the autumn. We’ll be continuing to focus on the Waste isn’t Rubbish part of our Go Local campaign, as well as working on Climate Mobilisation in the run-up to the Paris climate talks and beyond. Hope to see you at an event or stall near you!

Economics
The Birmingham Pound is still very much in the planning stage at the moment. We’re hoping to have some more news about this in the next few months, so watch this space!

Energy & Climate Change
Following on from the Speak Up Climate Lobby, we’ve got stuck into organising lots of Climate events and activities. We’re working with other groups on campaigning around Divestment in Birmingham and the West Midlands, including organising a funeral for fossil fuel investments for the Reclaim Power Day of Action on 10th October.

Nature
We’re in the midst of organising a Halloween Harvest Festival event on 31st October as part of our nature work. We’re still ironing out the finer details, but check out Tim’s article for more info and keep an eye for more promotion on our website.

Planning
Birmingham’s master planning document, the Birmingham Development Plan, which has been in development for a couple of years, has now been sent back from the planning inspector for the City Council to make a few changes. We’ll be having a look to see if there’s anything major being changed, and responding accordingly.

Transport
We’ve also been looking into some consultations on transport with the West Midlands Integrated Transport Authority consulting on its new strategy. Check out our website for more details of what we thought.

Waste
It’s been a busy summer for waste campaigning, with lots of talking to people on stalls as well as speaking at many community meetings across Birmingham. We’ve had a great response to our campaign for a zero waste city, with lots of petition signatures and groups signing up to support the campaign.  We’ll be continuing our waste campaign into the Autumn, putting pressure on Birmingham City Council to close the incinerator and create the most sustainable waste strategy possible.