After Paris – Thanks EcoSutton for a great event 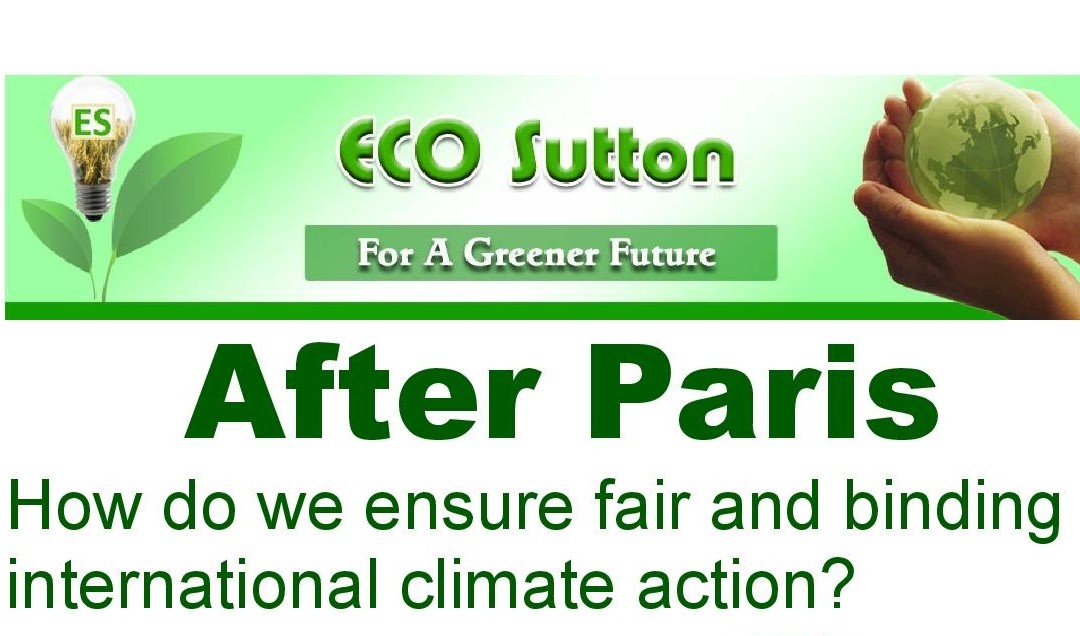 On Thursday 4th February I made my way to Sutton Coldfield to a great community event organised by EcoSutton. The group was established as part of the transition towns movement and seeks to focus attention on local environmental issues to make Sutton more sustainable. The event entitled ‘After Paris’ was held at St Peter’s Church and was well attended by local residents who had come to have a discussion about what could be done locally and to hear Andrew Mitchell, MP for Sutton Coldfield, give an overview of the Paris climate talks.

He went into a fair amount of depth on the talks so I have only included a few key points here. But I have included a link to the agreement itself and it’s well worth a read if you have not seen it before, especially the final 10 pages which contain the actual articles of the agreement.

Mitchell began by outlining the key components of the agreement including the new target of 1.5° warming compared to pre-industrial levels, outlined in article 2 of the agreement. This new figure takes account of the significant additional risk and impact associated with 2°. He described the emphasis on reaching peak emissions as soon as possible in order to make the overall warming target achievable.

He described how article 4 of the agreement recognised that developing countries should not shoulder a disproportionate amount of the burden and should not have their development restrained by the agreement, consequently they are expected to reach peak emissions later than developed countries. He also mentioned the $100 billion pledged to support developing countries climate mitigation and adaptation projects.

Finally he reflected on the increased willingness by a number of national governments to engage and make commitments in comparison to the previous climate talks, notably China, and commended Francois Hollande, the French president, for his role in holding the talks together and diplomatically ensuring all parties stayed engaged with the process. The floor was then opened up for questions to Mr Mitchell and other comments or ideas.

During the Q&A Mitchell stressed repeatedly his preference for using incentives rather than regulation to work towards meeting the new targets. Unfortunately he then defended much of the governments systematic removal of environmental incentives; cuts to solar subsidies, abandonment of the decade long commitment for all new homes to be ‘Zero Carbon’ by 2016, and watering down of incentives for greener cars [http://www.theguardian.com/environment/2015/jul/24/the-9-green-policies-killed-off-by-tory-government]. The solar subsidy cut was defended on the grounds that it was higher than was necessary to have the desired incentive effect. A fair point but one which, a resident pointed out, could have been remedied without such a shock by using a gradual stepped reduction as the fledgling industry becomes more competitive.

I took the opportunity to ask Mr Mitchell whether the West Midlands Pension Fund should follow the example of the Church of England and unburden itself from it’s poorly performing fossil fuel investments. But his answer was fairly evasive, pointing out that the pension fund’s priority was first to it’s pension holders before quickly moving discussion on. Rob Pocock, a well known local councilor, was also in attendance and presented a more progressive point of view, being the first to support the idea of a fracking free zone in Sutton and explaining the council’s plan to restrict very highly polluting vehicles from areas of central Birmingham.

After a tea break, and a piece of particularly good lemon drizzle cake, we split off into groups and discussed some questions which the organisers had suggested;

What is your vision for Sutton Coldfield in 2030?

One great idea was a detailed plan to better organise a local retail area, including the addition of a bus transport hub and the return to the surface of a stream which had been previously been sunken beneath existing development.

Reducing traffic and parking through Sutton Park was also popular as well as broader aims such as increased domestic solar capacity.

How can we get there?

The focus here was on education and information sharing

What should our priority be?

I think transport was the most widely discussed subject in this part of the evening; vehicle efficiency, public service provision and targeted schemes for school children to name a few examples.

And how can we better communicate with people?

Here there was a range of suggestions such as increased social media use and a regular column in the local paper, the Sutton Observer.

All in all I thought the level of discussion was fantastic, it was great to meet so many interested residents and to see Andrew Mitchell and Rob Pocock willing to listen to and engage with local people on these issues.