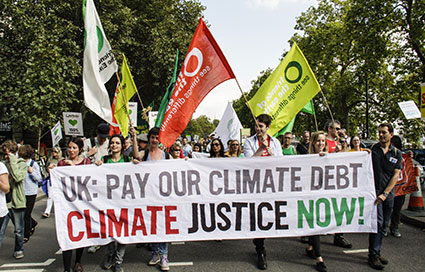 On 30 November, representatives from countries around the world will gather outside Paris for two weeks of negotiations at the catchily titled United Nations Framework Convention on Climate Change Conference of the Parties. Much has been said about the tortuous history of these talks, which have been going on for decades with very little of substance to show for it. And, Paris is more significant than most in terms of ratifying commitments and agreeing action.

However, far more interesting than bureaucrats and diplomats debating minutiae of carbon emissions in a corporate-sponsored airport conference suite is what’s happening outside of that space. On site, in central Paris, and across the world, civil society is working together to mobilise activists in a show of defiance against the injustice of global paralysis. We know that even if the outcome of the talks is more positive than we expect, the answers aren’t going to come from leaders and that Paris isn’t the last word in climate justice. Rather, it is a moment in time when people are talking about climate change, and a point that could galvanise the movement into something broader and more powerful than it is today.

On 28 and 29 November, as our leaders descend upon Paris, there are decentralised marches happening in capital cities across the globe, to let them know we’re watching and prepared to make a stand. In the UK, there are marches in Cardiff and Edinburgh on Saturday 28th, and in London on Sunday 29th. On the weekend of 5 and 6 December, a mass global village of alternatives is being held in Paris by the Alternatiba community.  This will demonstrate the myriad local projects and forms of organising that already exist and show that there is nothing inevitable about the current system. There will also be acts of protest and civil disobedience over the two weeks across Paris.

The most important actions, however, are happening in Paris over the final weekend of the fortnight, as the negotiators pack up and head home. Friends of the Earth International are organising an event on the evening of Friday 11 December, bringing together the network in an action to ‘light up the dark’.

Then, on Saturday 12 December, activists from all manner of environmental and social justice movements will join together to create a mass demonstration of solidarity and unity. Whatever our leaders cobble together during the talks, it is ordinary people, global citizens, who will have the last word.

Birmingham Friends of the Earth is going to be in the thick of activities leading up to, during, and after the talks. Over the next couple of months, there are a number of dates planned in the city to highlight international climate justice issues and mobilise people ahead of December. On Saturday 10 October, we will be taking part in the international Reclaim Power day of action against dirty energy. Details are being finalised as we go to press but this is going to put pressure on Birmingham City Council to divest from fossil fuels. See Rob’s article for further details about this campaign.

Five days later, on Thursday 15 October, we are co-hosting an evening panel discussion with EcoSutton, Equality West Midlands and Christian Aid. Speakers include Andrew Mitchell MP, Donna Hume from Friends of the Earth, and Mark Letcher from Operation Noah. This starts at 7pm at St Peter’s Hall in Sutton Coldfield. See our website to book a place.

Many more activities are in the offing and being developed over the Autumn by other groups as well. There’s a play called Baked Alaska at All Saints Church Centre exploring climate change from a Christian perspective, in Kings Heath on 20 October. On the evening of 28 November, there will be an interfaith vigil in the centre of Birmingham, as well as possible other actions earlier in the day. And, of course, we will be going down to London to join the national demonstration on 29 November, as well as heading under the sea to Paris itself for the 11 and 12 December. Friends of the Earth, nationally, is organising climate trains and accommodation and we should be linking in with that; if you are interested in joining us do get in touch.

Getting to Paris is one thing, but keeping the energy and focus on the climate moment after the end of the year is a whole other challenge. The ‘Where do we go from here?’ question still has many possible answers, but things like fracking, roads, aviation, coal are going to be key battlegrounds for people to organise around. In Birmingham, the divestment campaign is growing quickly. And, on 31 January,there is a People’s Climate Assembly being planned in London to take forward some of the networks that have developed leading up to Paris.

I’m excited about being part of this moment in time and having the opportunity to join so many other people in articulating a vision of a better world. I would encourage anybody that cares about justice and fairness to join us in Birmingham, London or Paris, if you are able. It’s far too important an issue to leave up to the leaders.