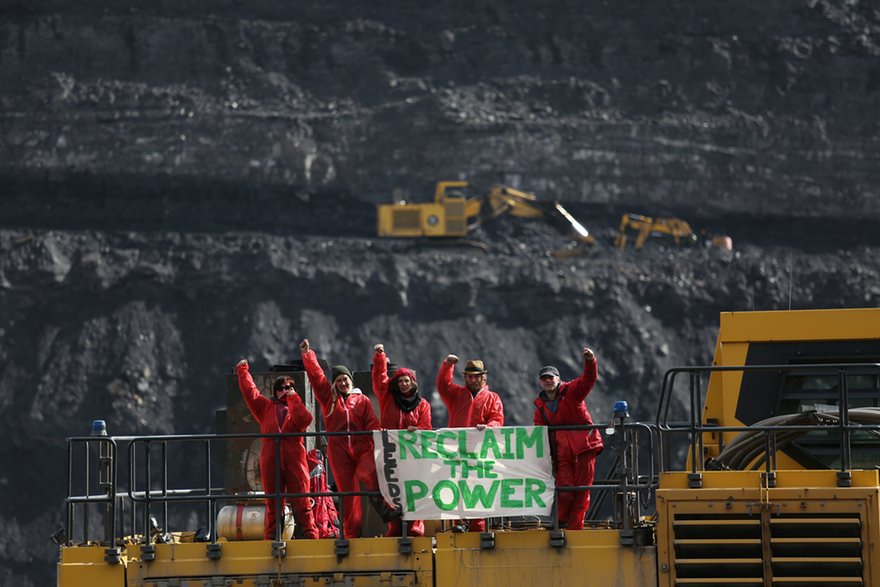 On 3rd May, hundreds of activists from Reclaim the Power shut down the Ffos-y-fran mine, the UK’s largest opencast coal mine. It was the start of Break Free, a wave of global actions targeting fossil fuels and demanding a transition to sustainable energy immediately. The action was supporting the United Valleys Action Group, who successfully fought off an incinerator and are now fighting plans for a new mine in the next valley.

I was at the Reclaim the Power camp helping with the preparation and, although I had to leave early, it was a privilege to be part of this community and to have helped towards such an inspiring action. I cannot think of a time when I have been surrounded by such welcoming people, united by a conviction that a better world is possible and it’s down to us to make that a reality.

We made our camp on common land, and constructed a fully functioning site, including compost toilets, a kitchen, a medical tent and a wind turbine for power. All attendees were crew and had to play an equal role in keeping the infrastructure running over the weekend. This was hard work. We were camping on top of a very high hill in the Welsh countryside, with no trees and nowhere to hide from the elements. And, in April, it feels very elemental. It rained a lot. It blew a gale. It was really cold. Hours spent lugging around access boards, creating ramps and washing up outside did take their toll.

It wasn’t all hard work – we had the wonderful Three Acres and a Cow performing a history of land rights through folk song, and music from Seize the Day, who also joined in on the action today. There was a great feeling of camaraderie and togetherness throughout it all and knowing we were all there for a purpose made everything easier. Camp decisions were made through active consensus, which meant that everybody had a say in the outcome and everybody participated equally.

It is this principle that I think is as important as shutting down the mine today. If we end fossil fuels but usher in an era governed by the same exploitation and unequal distribution of power, then that’s just not good enough. We showed that it’s possible to do things differently. We’re not going to wait for a better world to come along; we’re making it happen.