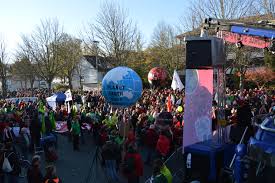 No one was expecting big decisions at COP (Conference of the Parties) 23 in Bonn in November 2017. Instead, it paved the way for rules that will set the Paris Agreement in motion, the deadline for this rulebook to be finished is 2018. A major talking point during the conference was the pre-2020 commitments, and the fact that too few countries have ratified the Doha Amendment covering the period between the Kyoto Protocol and Paris Agreement. Therefore these commitments are not yet in force and developing countries pushed developed countries to ratify as soon as possible.

At COP 23 all eyes were on the US and the fact that the US President announced withdrawal from the Paris Agreement in June, an African civil society group called for US to be barred from the negotiations. And when Syria announced they were ratifying the agreement, US became the only party in the UNFCCC to not support it.

Therefore many of us were wondering how the US delegation would act and while it was reported that they held a harder stance in finance and loss and damage talks, much was the same at the negotiating table. The US delegation did however host a panel promoting coal and nuclear in Bonn, it was disrupted by protestors and this was the US delegation’s only official appearance.

Noteworthy is the fact that the US had an alternative delegation, called ‘We Are Still In’, a coalition of cities, states and businesses together representing over half the US economy asking for a seat at the negotiators table.

In COP 24 in 2018 a global stock take will take place, to see how climate action is progressing. This was initially called the “facilitative process” but changed name under the Fijian presidency to Talanoa dialogue. The information will be used to inform the next round of countries Nationally Determined Contributions (mitigation and adaptation measures as well as financial contributions) that are due in 2020.

After a couple of years with CO2 emissions plateauing, they are due to peak again in 2017 and a global stock take is welcome. And we are far off the “well below 2 degrees” target set in Paris. See you in Katowice, Poland 2018 for the next round.