Today – D12 – was a day that had been written in a lot of our diaries for a long time. The day civil society from across the world stood together to have the last word on climate justice after two weeks of talks that were never going to deliver the sort of ambition that justice and humanity demands. A vast coalition spent the last two years meticulously planning a mass mobilisation – and then the last four weeks completely replanning and renegotiating the entire thing. Events took over, as they do, and with Paris under a state of emergency it fell to us all to prove how creative and resilient our movement is. 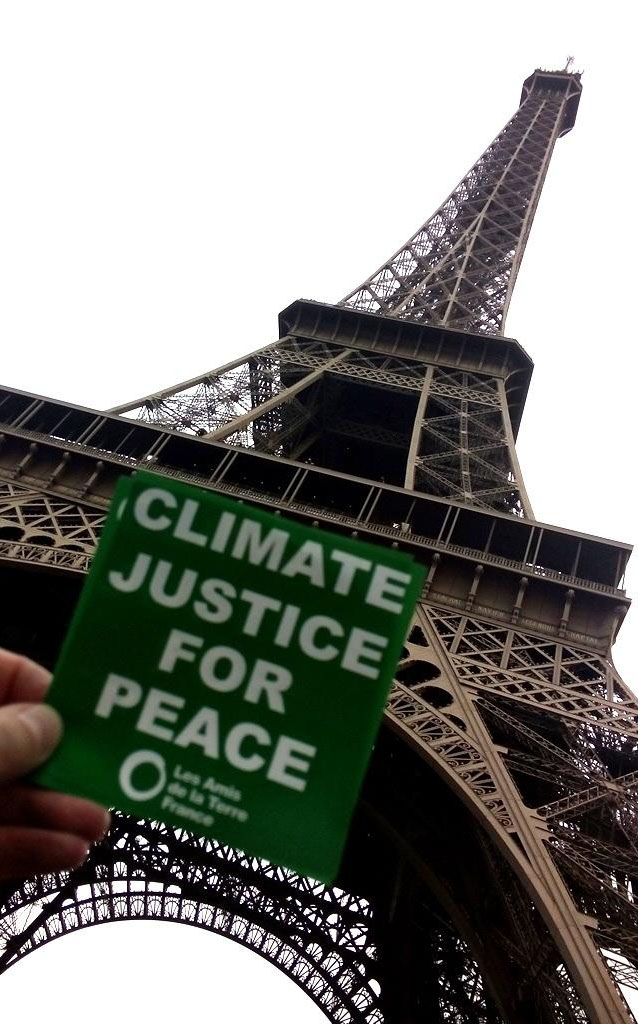 For Friends of the Earth this meant harnessing technology to create a powerful statement, spelling out Climate Justice Peace across Paris through hundreds of separate geolocated points. Split into groups of three or four people and given a point on a map to virtually check into through GPS, this was a very different type of mass mobilisation. Taking and tweeting a photo of ourselves on a quiet street of nonplussed passersby, it didn’t feel like we were connected with thousands of activists, and after twenty minutes staring at the website resolutely not loading we were resigned to the fact that the big picture might not be too impressive.

Only much later did we see the final message and realise that it had actually worked far better than we ever imagined (we were part of the ‘C’ in Peace). In a lot of ways this is exactly what campaigning with Friends of the Earth is like – a small group of people doing something that nobody else seems to notice and is easy to think does not matter. It is only later on when we look at the big picture that we can see the impact our little action has had. Even when we aren’t physically together, we are united by our values and our commitment. 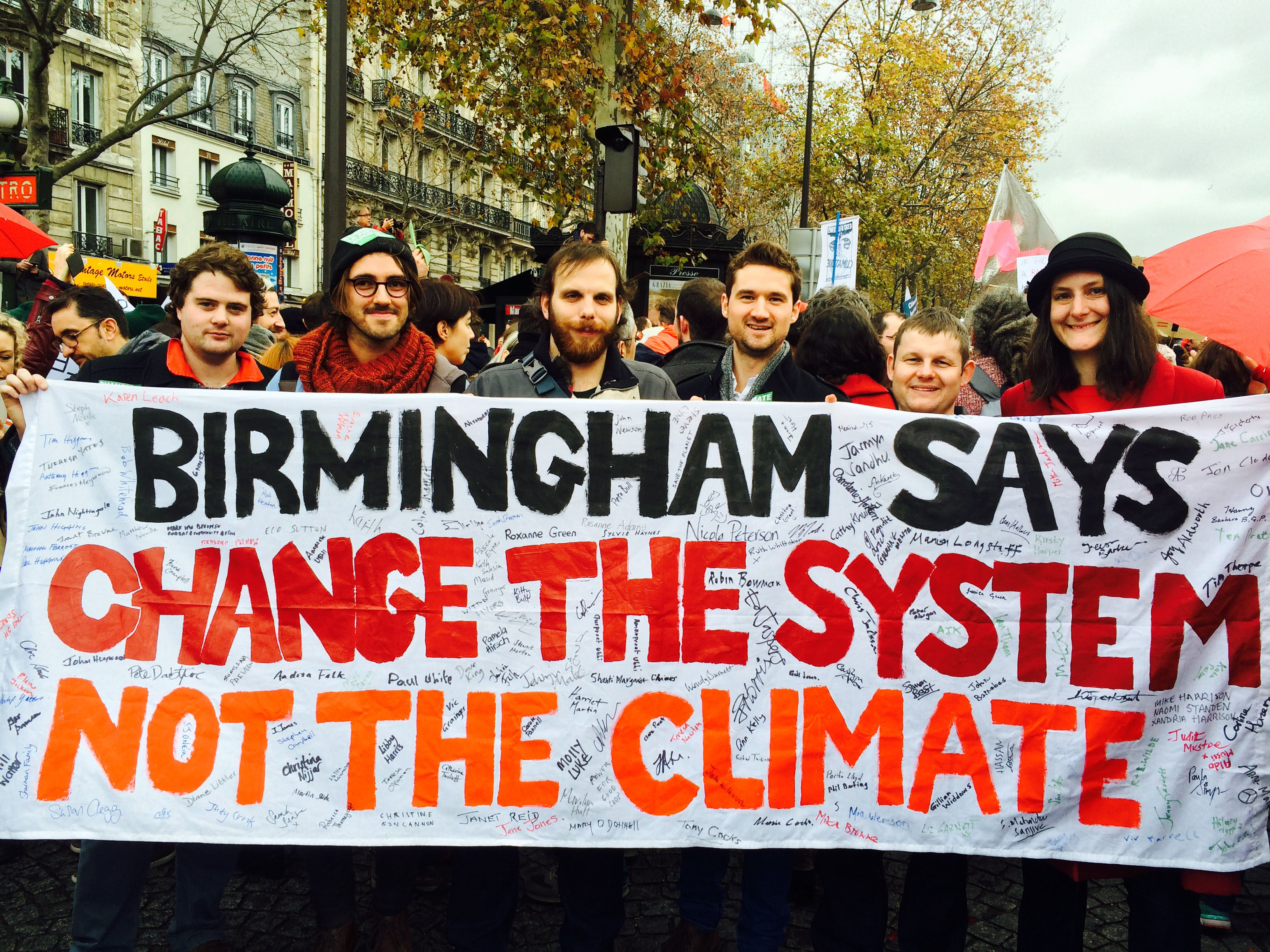 We went straight on to the brilliant Red Lines action, laying massive red lines up to the Arc de Triomphe to symbolise the red lines that cannot be crossed. We then dashed to join a human chain underneath the Eiffel Tower and were rewarded at the end with a joyful rally dancing to a French pop band. Neither of these events were supposed to be allowed under the state of emergency but the defiance of the movement meant that we were not silenced and we made our message heard loudly and peacefully. 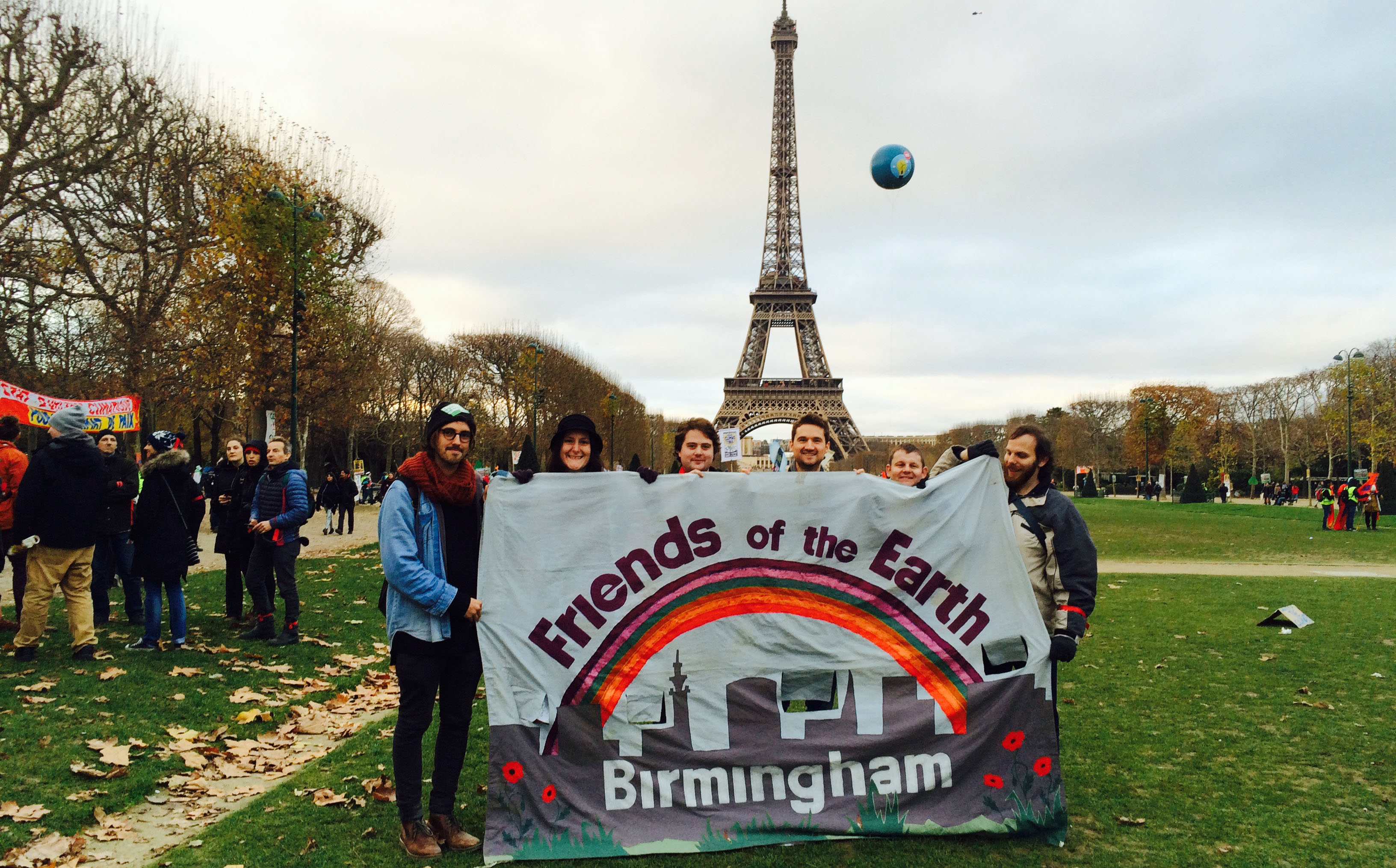 It has been a very long day and we are all exhausted. I had breakfast at 6:30am and didn’t eat again until half past seven in the evening, as we were constantly moving to the next action. As well as brilliant moments today was characterised by a lot of standing around waiting for something to happen. But it was never about today – it’s about what we do when we go back to our communities and back to our local fights. Everywhere I have turned the last two days I have run into another friend fighting for the same things as I am, and I truly believe we might be on the cusp of becoming a movement strong enough to deliver on the promise of a better world.