Defenders of Justice, Warriors of Truth 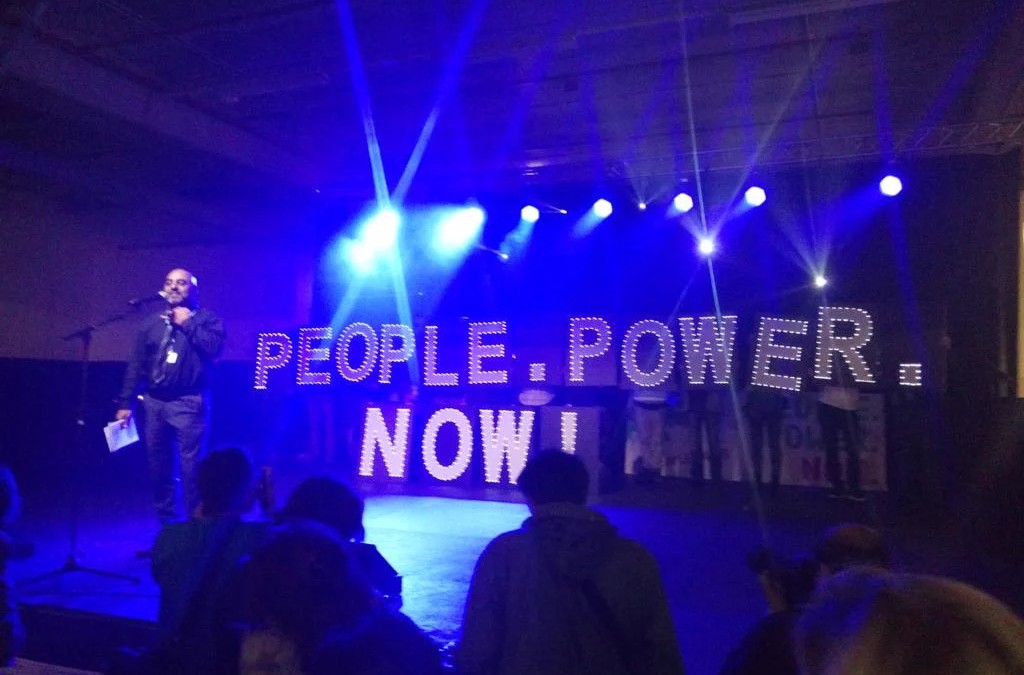 So here we are in Paris – we’ve made it to stand shoulder to shoulder with friends and allies from across the world and demand climate justice. This evening BFOE activists past and present joined 2000 people from the international federation of Friends of the Earth groups in a glorious celebration of people power and an affirmation of the growing strength of our movement.

The theme of the event was People Power Now and we had an action spelling out those words, lighting up the dark with an inspiring message. It was a welcoming, inclusive space for activists, a chance for people to get to know each other. I can’t overstate how important this is; so often we can feel like we are fighting forces so massive they are insurmountable. But connecting with people fighting the same battles across the world we realise that we are a pretty massive force ourselves.

The incomparable Young Friends of the Earth held a climate justice assembly highlighting all the amazing actions they have been doing over the past couple of weeks, and bringing together young people to share experiences and learn from each other. They are doing incredible work on intersectional climate justice and showing that youth are really leading the resistance.

There were inspirational speeches from people who are fighting on the frontlines of climate justice, in the Global South and in marginalised communities across the world. Tonight showed me how strong, how united and how diverse Friends of the Earth is at its best. Asad Rehman can always be relied upon for a rousing speech but when he described us as ‘defenders of justice, warriors of truth’ it didn’t feel like empty rhetoric. It felt like an accurate description of a movement that is growing into a powerful force for change.

Tomorrow we are up at 7am for a day packed full of action, joining the FOE family in spelling out our message of Climate.Justice.Peace across Paris. There is a palpable sense of electricity around Paris – it is so exciting to be reconnecting with friends from across Europe, to be uniting together and raising our voice to get our message of hope heard above the depressing drone of fear, vested interest and business as usual that is coming out of the COP down the road. Civil society is having the last word – as the call from Young FOE Europe went: ‘We are unstoppable – another world is possible!’.