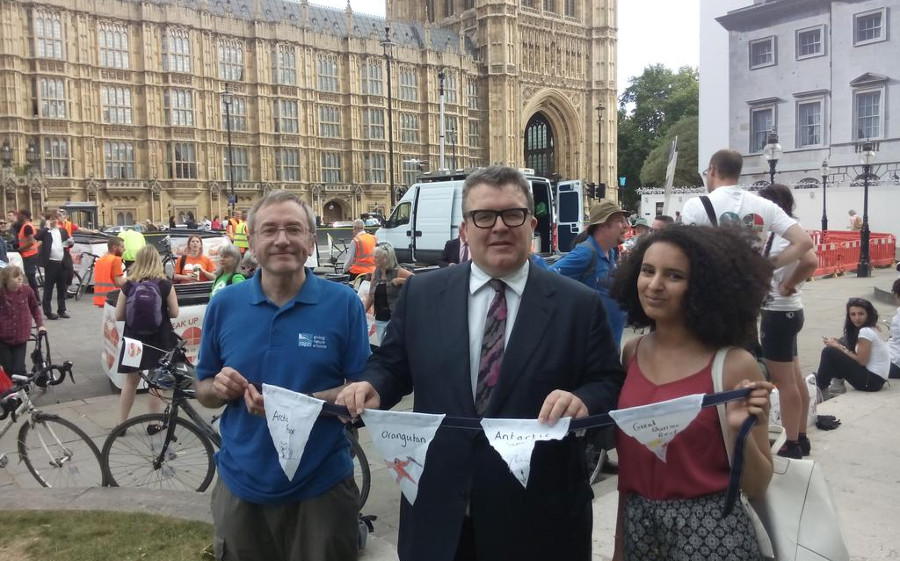 On 17th June 2015, Birmingham Friends of the Earth joined many other organisations including Christian Aid and RSPB at the “Speak up for the Love Of” mass lobby of the Climate Coalition.

A total of around 9,000 constituents came together outside the Houses of Parliament and collectively sent a strong message to our MPs to act on climate change. As a group at Birmingham Friends of the Earth we lobbied a total of 5 MPs – and a total of 8 out of 10 MPs from Bimingham constituencies were lobbied on the day.

As the first mass lobby I’ve been to as a new volunteer, it was a great one! The sun was shining and the atmosphere was lovely and positive.

Thousands of us joined to pressure MPs to act on climate change, with asks such as a complete ban on fracking, no airport expansions and insulating at least 6 million homes by 2025.

We arrived at the Houses of Parliament at around 1 o’clock, and after a few phone calls and a walk through security, Jodie, Julien and I were waiting in Westminster Hall for Shabana Mahmood (Ladywood constituency).

Jodie, a constituent of Ladywood, had an effective discussion with her, particularly about the Solar Schools Action Plan which Shabana Mahmood previously had no knowledge about. Following the discussion however, has said she will look more into it and will contact Jodie about a follow-up meeting back in Birmingham – success.

As a consituent of West Bromwich East, I spoke to Tom Watson alongside another constituent. Tom seemed really supportive of acting on climate change after we spoke about local issues such as solar panels for schools and insulating homes, both of which he seemed to find important, as well as other renewable energy sources.

Meanwhile, Roxanne had a discussion with Roger Godsiff (Hall Green) – getting through all 10 of the FoE asks; Julien along with over 20 other constituents met with Steve McCabe (Selly Oak) and Paula met with Jack Dromey (Erdington).

The day ended with the rally, consisting of speakers such as Asad Rehman of the Climate Coalition, who gave a very inspirational speech, and finally some lovely music from the band Stornoway.

Overall it was a great day shared with thousands from all over the country coming together for this urgent issue – let’s hope we see some changes soon.